Below you’ll find answers to the questions we get asked the most about, but if you have any other questions, please feel free to get in touch…

We have a very comprehensive information system in our shops for Allergen information.

If you suffer from a severe allergy, please check with our Sales staff at the point of purchase for up to date information.

Please feel free to ask any of our staff to view this when visiting our shops.

Which of your products are suitable for Vegans?

Which of your products are Egg Free?

Which of your products are Milk free?

Which of your products contain Soya?

Which of your products contain Sulphites?

Which of your products contain Nuts?

At the moment we do not collate such detailed information.

In order for us to work this out for every product that we sell we would have to go through the process of collating all the information from every Specification sheet, for every ingredient that we buy.

The Raw materials we purchase for our products are manufactured by some of the leading industry food companies, both in the UK and Europe. It is very difficult, nigh impossible for a small family business to dictate to our suppliers as to the use of Palm oil.  (You only need to look at the ingredient lists on products in Supermarkets to realise how much Palm oil is used.)

In 2018 having spoken to a number of suppliers about this issue, they were all working towards this agenda. The world itself is becoming more aware of using sustainable sources for palm oil. Equally so are our suppliers, many of whom are now adding declarations to their specifications sheets, to state this.

One might expect that a strong environmental coalition would be forming to rid the world of palm oil entirely, but many environmental groups seem to be taking a more practical approach. Because there simply isn’t a viable alternative, Greenpeace and others are lobbying for a more sustainable approach to palm oil production, recognising that it’s a major income source for developing countries. Palm oil itself is an important and versatile vegetable oil that is used as a raw material for both food and non-food industries. Most of the oil is used for food applications such as cooking, margarines, spreads, confectionary fats, ice cream, and emulsifiers.

Why do some of your staff not wear blue gloves in food production?

The wearing of gloves is not proof that someone is producing safe food, and practicing good hand hygiene. If anything it can promote poor practice, and misconception. Bacteria can be present on Blue food gloves as well as bare skin.

Our staff are educated before they even commence producing our products, about the importance of Hand hygiene.

We have a very comprehensive hand hygiene system in place, and we also carry out periodic/random hand swabbing of our staff in order to monitor their hand hygiene practices. 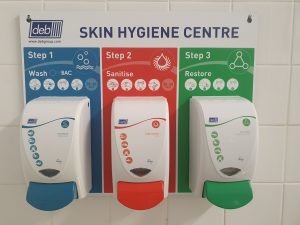 Our customers can have confidence, that it is a pre requisite for us, to produce safe food at all times.

Just over 20 years ago, our main jam supplier informed us that they would no longer be making our fig jam. Their fruit macerator had broken down, and they were not going to replace it. The death of our fig slice was on the cards.

Fast forward 20 years and after 3 different local jam makers, all of which have now given up the ghost or do not want to make fig jam.

We are sat here with our own recipe, hoping to get lucky and find another small company who can make jam for us, in small quantities.

Unfortunately large jam companies are only willing to make 1 ton quantities of bespoke jams, and it would take us over a year to use that…..

So keep visiting, and keep watching. You never know?!

How much salt is there in a loaf?

The maximum amount of salt in our bread is equivalent to 0.5g per slice.

How do I keep crusty bread from going soft?

Ask for a micro perforated bag to pack your crusty bread  rather than the normal freezer bags which will soften the crust.

Our bread range is unique to Oddies, and cannot be bought anywhere else not even in Supermarkets! So if you haven’t tried them you should 😊

Why have Eccles cakes disappeared from your shops?

Our retail price for these was £1.31 each(in 2019) at the same time you can buy  “real Lancashire” Eccles cakes from all the local supermarkets at £1.60 for 4.  A question we get asked on many occasions about our products is “Why are you so expensive, compared to supermarkets?”

All our Eccles cakes were made by hand, using our own Butter puff pastry, and coating the currants with butter and brown sugar. They cost the bakery 88p to make. This is before we take into account delivery costs, sales staff wages and shop overheads, plus a little bit of profit.  As you can hopefully see from this, we are not profiteering. Sales had fallen and we believe they had just outpriced themselves hence our decision to delete them from the product range.

Times are changing and we have to look very closely at our range of products in order to remain competitive on the high street.  We cannot compete with mass producers, and supermarket prices…. But we feel we can compete against them, and win, with the quality and freshness of all our bread, daily confectionery, sandwiches and savoury products.  This is where we will concentrate our efforts in 2019 and beyond – making unique Oddies products for our own retail outlets, using recipes that we’ve developed and are exclusive to us.

Why are you still using Plastic Bags?

We always put bread & tea cakes in recyclable plastic bags with a recyclable fastener to keep bread fresh. Our paper bags are not suitable for a loaf and putting a sliced loaf in a paper bag or wrapping it in tissue is nigh on an impossibility. We are more than happy for customers to ask for different packaging.

We have been looking at our plastic packaging for a while now and have spoken at length to our suppliers.   They tell us that although you would think paper would be a better option; in reality paper products have a larger carbon footprint.  Paper is 4 times bulkier to transport across the world from China therefore more costly for businesses and customers with more ships using more fossil fuel, it also creates more methane gas (when paper degrades)  and has a negative effect on the ozone layer.

Oddie’s plastic carrier bags contain an additive (EPI) which breaks down the plastic when in landfill, heat, wind & water also break down the plastic. We consider this to be the best option available currently.

In the future we are aware that we will have to charge for carrier bags and so we are looking at a ‘bag for life’ option which will have an initial cost to the customer but will be fully recyclable and also more substantial.

Unfortunately we made the decision to cease doing these from Monday 28th January 2019. As you can imagine this has been a very difficult decision to make, because we have been making Celebration and Wedding Cakes since 1905.

To make quality celebration cakes takes time and a lot of skill.  Over recent years our sales have reduced dramatically, with customers preferring to purchase cheap, mass produced, off the shelf cakes from Supermarkets.  We simply cannot compete any longer.

Times are changing and we have to look very closely at our range of products in order to remain competitive on the high street.

We cannot compete with mass producers, and supermarket prices…. But we feel we can compete against them, and win, with the quality and freshness of all our bread, daily confectionery, sandwiches and savoury products.  This is where we will concentrate our efforts in 2019 and beyond – making unique Oddies products for our own retail outlets, using recipes that we’ve developed and are exclusive to us.